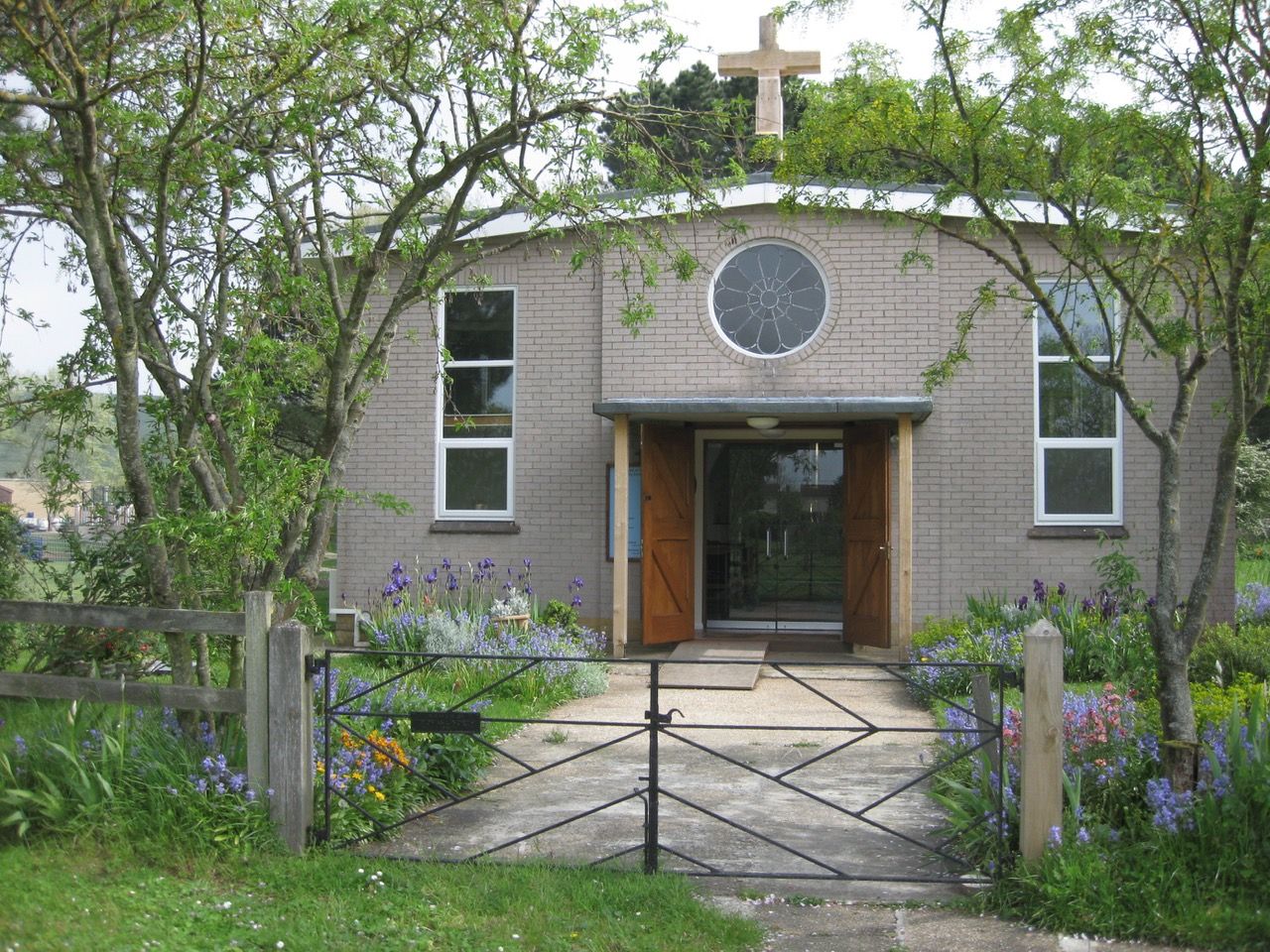 is at the end of Jubilee Close, Palmarsh, Hythe CT21 6NQ. It is a small mission church built in 1958 for the people in the west of the town. It is a lovely, accessible and friendly building.

At the moment there are no services at Holy Cross.

The church can be made available for community use and events at low cost. Please contact the parish office for more information.

(Information for this article has been gleaned from material collected by the late Mrs Jessie Lynch, from Flora Laundon’s sermon preached on the occasion of the 40th anniversary of Holy Cross Church and from various friends and members of the church.  If any of the information is incomplete or incorrect I ask the reader’s forgiveness.)

Holy Cross Church was designed by architect Cyril Griggs and built by Sharp and Son. The site was levelled and building began in October 1957.  “Soil for the surrounding area was brought from St Leonard’s Church where excavations were taking place in preparation for a new vestry.  Amongst the soil were many bones which had to be removed (by hand) and taken back for reburial.  Soon the roof beams were in place.  These came from Sweden, the first to be used in this country.  Embedded in the wall just above the inner doors is a piece of stone brought from the war-damaged Westminster Abbey.”

Tony Clark was one of the builders employed by Sharp and Son as was Mr Vale who became the first churchwarden of Holy Cross.  The total cost of the build was £3575, a ridiculously low price to us in 2008, but a large amount to raise in 1957-8.  “Money was still needed for furniture.  So Canon Newman obtained £49 and converted some old tables from an Infants School for seating.”  (These benches are having to be discarded one by one, and we look forward to replacing them in the future with more comfortable chairs – another project requiring fund-raising!)  Oil stoves provided heating  at first, and other furnishings were moved from Palmarsh Hall, where services had been held until September 7th 1958.  The name of Holy Cross had been chosen and the service of dedication was conducted by Bishop Meredith, Bishop of Dover and Revd Newman, vicar of Hythe on 13th September at 7pm.  Revd Newman felt that the builders should have a place of honour at the service, so the workmen all donned their Sunday best and sat in reserved seats in the front two rows.

It is interesting to explore the little church of Holy Cross looking at the furnishings and realising just how much this church belongs to its congregation and community past and present.  The carved balustrades in front of the pews are a case in point.  They were found in a barn at Sandling Park, blackened and covered in chicken droppings, and were given to the young apprentice French polisher, Ray Coombs, to restore to life as part of his training.  Then Major Hardy presented them to Holy Cross Church.

The oak font was given in memory of Mrs Agnes Done by her friends and family. It was made by local carpenter Mr Chalk, while the copper bowl of the font was made by Jessie Lynch’s son Terence in his metalwork class at the Harvey Grammar School.  The communion rail and light wooden chair in the chancel are in memory of Revd and Mrs Elson. Revd Elson was one of a long line of retired clergymen who have served us well at Holy Cross (and still do).  There used to be a thriving choir at the church led by Mrs Hogston, who worked the long kneelers at the communion rail.  When she died in 1984 she left money for small tapestry kneelers to be made for the pews.  So the ladies of the congregation set to, learning the necessary skills as they went.  If you turn some of the kneelers over they still bear the name of the person who made them.  The larger kneeler in the chancel was made by his aunt in memory of Martin Wright, son of John and Lesley, who died tragically young.  The silver ciborium which holds the wafers for communion was also given in his memory by the congregation.

Some people may not realise that at first Holy Cross church building was shared between Anglicans and Roman Catholics. (The Catholics held their service on Saturday evening, later changing to Sunday morning after the 9.30am Anglican service.)  The cross in the garden was given by the nuns when the convent which stood on the site of St Saviour’s Hospital closed.  It came from the end of their chapel.  Years later in 1998 the nuns of the Marist Convent also gave us the wooden Madonna and Child which stands by the vestry door.  The dark carved chair with the barley sugar twist legs which stands in the chancel was used by the Roman Catholic priest when he heard confession (in what is now the kitchen!)  It was Revd Marcus Ramshaw who recognised its merit and organised for it to be restored and returned to use.  He also found the figure of the crucified Christ which hangs on the inner door of the vestibule.  It was dedicated on the Church’s 40th Anniversary.

Other recent additions to the church are the present heating and lighting paid for by a legacy from “Uncle” Fred Elton and his wife; the beautiful altar frontal given by Mrs Siddely and our much loved Eddie Leroy; the framed appliqué panels made by Mary Thomas and the Sunday School to commemorate the millennium (these replaced the banners made by the ladies of the church some years earlier); the tapestry picture of the Last Supper made by Mrs Goddard; and the outer doors, a gift from John Wren.  And of course we are truly grateful for two substantial anonymous gifts that have largely covered the cost of installing the new toilet for the disabled and the kitchen. And the “ordinary” members of the congregation have always been very generous of their time, money and gifts in kind to make Holy Cross Church the warm and welcoming place it is today.

Holy Cross Church belongs to Palmarsh in a very special way and when we worship there we are surrounded by so many tangible reminders of friends past and present who have contributed to making the church what it is today.

The Parish of St Leonard, Hythe